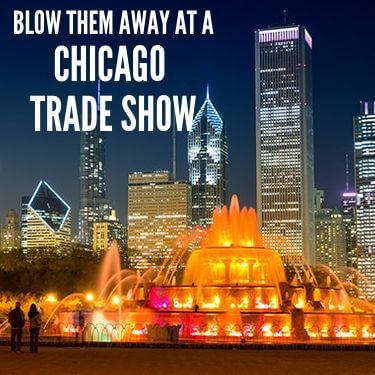 Blow Them Away at a Chicago Trade Show

Here’s the deep dish on Chicago trade shows: The Windy City is one of the top destinations for exhibitions and conventions in the United States. Thousands of industry leaders from a wide range of sectors gather at Chicago trade shows every year to showcase the latest in manufacturing, design, candy and snacks, beauty and makeup, design and more.

Chicago is the third most popular city in the United States for trade shows and corporate events, according to Exhibitor Magazine. If you’re planning on exhibiting at a Chicago trade show, it’s important to make the most of the opportunity. First, learn your way around the top Chicago exhibitions and the major convention centers.

What to Know about Chicago Trade Shows

Unlike most other major trade show hotspots (such as Las Vegas and San Diego), Chicago isn’t known for fair, sunny weather or glitzy tourist attractions. Rather, Chi-Town has established itself as an exhibition hub on the strength of its industry leadership, top-notch facilities, and business activity.

To start, Chicago is home to the largest convention center in North America, McCormick Place. The city is also a major industry hub for fields such as manufacturing, printing and publishing, finance and insurance, and food processing. The Chicago metro area is home to several companies Fortune 500 list, including major players such as Walgreens, Boeing, Allstate, Caterpillar, Deere, US Food Holding and more. All of these industries make Chicago a great place for retail trade shows, hospitality trade shows and more.

The city’s high proportion of industry leaders in these sectors makes it a natural fit for related trade shows to come to Chicago every year. You’ll reliably find major manufacturing trade shows in Chicago, such as the IMTS Show and PACK Expo. Additionally, the city hosts top candy trade shows and makeup/beauty trade shows.

And don’t underestimate the sheer population of Chicago: The third largest city in the United States with 2.7 million people, Chicago is guaranteed to be buzzing with activity for any major event.

Need help shipping your trade show booth and materials?
Fill out a short form or give us a call and one of our trade show specialists will answer your questions.

Get My Freight Quote 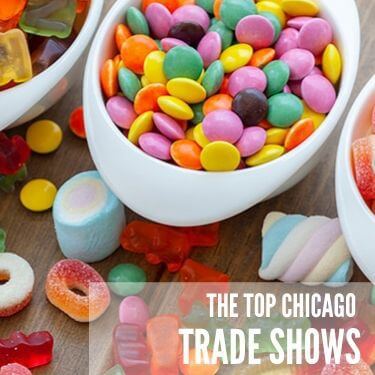 The most important trade shows in Chicago every year span manufacturing, hospitality, food processing, fashion and beauty, design and home decor, and promotional products. Get ready for the following trade shows to make a major splash in their industries.

One of the largest manufacturing shows in the world, IMTS drew more than 129,000 people at its last event to see the latest innovations in technology and processes. Held annually at Chicago’s McCormick Place, IMTS saw more than 2,500 companies exhibit on the 1.4 million square foot trade show floor.

When it comes to trade shows, it doesn’t get sweeter than this. The Sweets & Snacks Expo offers previews of new treats, retail strategies, and networking opportunities for people in the industry. The show hosts 20,000 people and 700 exhibitors at McCormick Place.

Held at McCormick Place in July, the ASI Show is a top show for the promotional products industry. The show also holds an event in Long Beach in March. More than 500 suppliers exhibit at the ASI Show.

This major manufacturing show bounces back and forth between Las Vegas and Chicago. Focused on the packaging industry, the show attracts more than 50,000 people and over 2,000 exhibiting companies across 1.2 million square feet of McCormick Place.

Calling itself “world's largest marketplace of home and housewares professionals,” the International Home & Housewares Show lives up to that reputation by drawing more than 55,000 people and 2,200 exhibiting companies to McCormick Place.

Salon owners and workers convene for this huge yearly show at McCormick Place. Attendance at the show exceeds 76,000, including customers from every state and 35 different countries. The show has been running for 96 years now.

Need help shipping your trade show booth and materials?
Fill out a short form or give us a call and one of our trade show specialists will answer your questions.

Get My Freight Quote 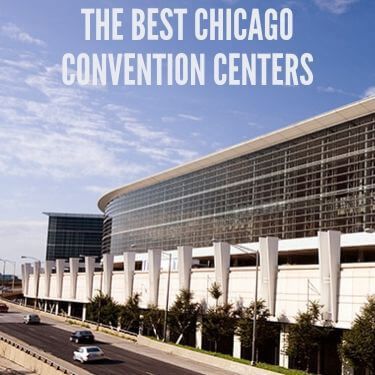 Chicago wouldn’t have become the trade show destination that it is without first-rate facilities to handle the influx of attendees and exhibitors. The following convention centers collectively see millions of visitors each year.

Why do so many top trade shows happen in Chicago? One answer is obvious: The city’s McCormick Place is the largest convention center in the United States. The 2.6 million square feet of exhibit space dwarf most other event venues. The four-building facility is located along Lake Michigan, about two miles south of Downtown Chicago. Here are a few of the top Chicago trade shows at McCormick Place:

Formerly the Merchandise Mart, theMART was once the largest building in the world, with more than 4 million square feet. A commercial building and design center, theMART hosts several trade shows a year related to design, fashion and beauty. These are just a few of the major shows that happen at theMART:

Shipping to a Chicago Trade Show

If your company is planning to exhibit at a trade show in the Windy City, don’t get blown over by all the complications of shipping your booth materials. Leave it to a knowledgeable team of trade show shipping professionals.

Need help shipping your trade show booth and materials? Fill out a short form or give us a call and one of our trade show specialists will answer your questions.

RECENT POSTS
Trade Show Sales Tips: 5 Habits Leading to Lucrative Events
Trade shows are back, but your people skills may be a little rusty. If you’re eager to get back on...
Trade Show Messaging: Increase Target Audience Leads
Display booth games and flashy demonstrations are fun, but what you really want are profit-generatin...
Trade Show Giveaways Under $1: Brand Awareness on a Budget
Planning a budget for a trade show is stressful because you need to see a decent return on your inve...
Eco Friendly Trade Show Giveaways: All About Sustainability
Standing out at trade shows has a lot to do with what you’re handing out. Stand out from the crowd...
How to Make a Trade Show Booth Stand Out: 7 Epic Tactics
Making one booth stand out of hundreds that may be at a trade show isn’t easy. You need to be read...
Trade Show Scavenger Hunt: On the Prowl for New Business
Adding games like trade show scavenger hunts can be a good way to highlight your business. Find out ...
What First Time SEMA Show Exhibitors Want to Know
First-time SEMA show exhibitors might feel overwhelmed. Take the edge off by following a few useful ...
How to Plan a Virtual Conference
Think of the virtual space just as you would the on-site venue when you are figuring out how to plan...
The Total Guide to Virtual Conferences 2020
One of the biggest and most important aspects of attending a virtual conference is the opportunity t...
Trade Show Giveaways Frequently Asked Questions
You’re at a trade show and are possibly unsure about what would be appropriate to offer to patrons...

Need help shipping your trade show booth and materials? Fill out a short form or give us a call and one of our trade show specialists will answer your questions.